The Swede Road house is our first private residence. It's a little difficult gaining the confidence of owners, and to get them to allow a group of strangers into their home to search for evidence of ghosts, so D.A.P.S. thanks the owner of the Swede Road house for allowing us to conduct our investigation there.

The Swede Road house is located in southeastern Pennsylvania. It's been owned by the same family for several decades. It is a cape cod style home with the upper floor being converted into a rental apartment. Not long ago, the original owners of the house passed away. The lower level has been unoccupied now since that time. The son of the former owners lives in the apartment on the second floor. He keeps the ashes of his parents in the first floor living area. All of their original belongings are also still there just as they always were when his parents were living. 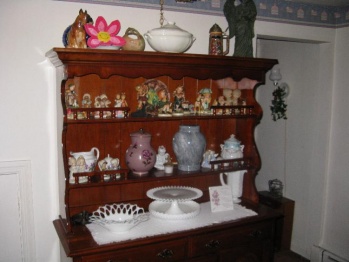 Recently, the son claims that he has experienced strange noises and phantom smells coming from the lower level. He swears that it's like his mom was down there fussing in her kitchen, and cooking meals. He has asked D.A.P.S. to come in and see if we can capture any evidence that his parents spirits have returned.

D.A.P.S. sent in investigators in teams of two as the location is rather small. Brian and David took the first round and took digital photos, and performed EVP sessions in the master bedroom, kitchen and eating area, and the den. They picked up a very strong EMF reading in the master bedroom that was located only when the detector was pointing at the owners makeup tray. On further investigation, this was debunked as a small plug in transformer in the receptacle behind the dresser.

The second team was Jennifer and Kimberly. They also took digital photos, and conducted EVP sessions in the living room, master bedroom, and the formal dining room. We also had the mini-DVD recording across the kitchen into the eating area. Kimberly and Jennifer did not have any personal experiences.

After a few hours of investigating the location, D.A.P.S. packed up its equipment and headed home. The evidence D.A.P.S. captured was reviewed and nothing was captured on the Mini-DVD, digital photos, and the EVP recorder. In fact, the location was so clean, the reviewers didn't even see a dust particle in any of the digital photos.

In conclusion, the Swede Road house is definitely not haunted.