D.A.P.S. was called in to investigate a personal residence in Huntingdon Valley, PA that was built circa 1780. This house is steep with history. Built just after the Revolutionary war, and the house has stood through many historical events in our history including the Civil War, and two World Wars.

D.A.P.S. was called in by the current owners, who have been in the house for over a quarter century, to investigate strange noises and activity they have experienced over the years. We were given a tour of the home, and told about the activity they have experienced there. The owner claimed experiencing lights dimming and flickering in the den as well as up on the third floor in a baby's bedroom. Fixtures have been replaced and wiring has been replaced, and the lights continue to dim, flicker, or go out on their own. D.A.P.S. was told of bangs and objects being manipulated in the dining room just off the computer room. When the owner checked to see if anyone was there, they found no one. The owners reported seeing shadow people or apparitions going up and down the staircase as they sat in the living room. D.A.P.S. was also told of uneasy feelings in a second floor bedroom, and of hearing walking, shuffling and movement of objects in a third floor bedroom which is now unoccupied. D.A.P.S. was given a tour of the dungeon like basement which was damp and dark. The owner reported feeling very uneasy down there, and will rarely go down there unless they have to.

With this information, the D.A.P.S. team set up our equipment and paired off into teams of two. D.A.P.S. investigated the home for several hours using all available equipment and techniques. One of the important things for a paranormal group is to capture solid evidence of paranormal activity. Further, its more important to capture evidence that does not fit in with the surroundings making it stand out more as being paranormal, and to capture evidence that backs up what the owner claims is happening at the location. It's also important to capture data that will back up experiences had by the paranormal investigators during their investigation, and to find evidence of normal non-paranormal events that might explain what the homeowners are experiencing. This investigation was fruitful in that type of evidence. Upon review of the evidence, we did find what we think is solid proof that something out of the ordinary is happening at the residence.

We will cover photo evidence first, followed by EVP clips. One note regarding Orbs. Many paranormal professionals dismiss Orbs outright. Far too many groups try to present paranormal Orb "evidence" that allegedly show Orbs when in fact they are bugs or more likely dust. D.A.P.S. does not completely dismiss Orbs as a legitimate paranormal event, however, D.A.P.S. is very cautious about presenting what we believe may be legitimate Orbs unless there is compelling evidence as to the Orb being a legitimate paranormal event. In the following photos, D.A.P.S. has captured what we believe are legitimate Orbs. Our reason for believing so is the fact that D.A.P.S. captured no other Orb's in any of its photos of other locations in the home, and they only caught them in locations where the homeowner experienced paranormal activity and in two cases, D.A.P.S. team members experienced activity. There is simply too much of an argument against this being a coincidence that all three would be experienced in the exact same spots together.

Our findings are as follows.

One of the claims by the homeowner was working on the PC and hearing bangs and shuffling coming from the dining room which is next to the study. They also claimed to smell flowers from time to time. The D.A.P.S. team caught what we believe is a paranormal ORB in the dining room as shown in the photo below. Note the extreme brightness of the Orb and its perfect round shape. That along with the fact that it is not directly in line with the camera flash, and that the home owner experienced activity in this room leads us to believe that this is a legitimate paranormal Orb. 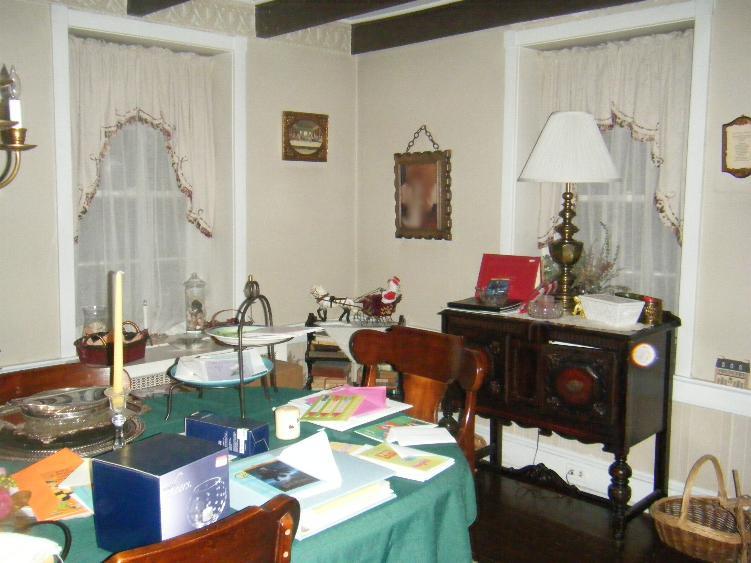 Orb to right of server.

Another area where activity was reported was the staircase where the owners reported seeing shadow people, or black apparitions going up or down the stairs. While investigators David and Chris were doing a sweep with the K-2 meter, they got a momentary full spike with the K-2 right at the base of the staircase handrail. They tried to locate the source, but at the base of the staircase handrail there are no electrical sources. They moved the K-2 around trying to locate the entity again while asking it to come close again. Nothing happened. They started moving up the stairs again, and the K-2 again spiked all the way up as Chris held it just inside the handrail. Again, David and Chris asked the entity to come close to the meter and make it light up, but they experienced no more activity at that time. A short while later, Jenn and Valerie were performing their investigation, and snapped the photo below clearly showing an Orb like object in the exact spot the home owner was seeing the shadow people and apparitions, and near where David and Chris experienced the two K-2 spikes. Again, note the brightness of the Orb and its perfect round shape. Due to the homeowners experiences at this spot, and the experiences by Chris and David at the same spot, we believe that this is a legitimate paranormal Orb. 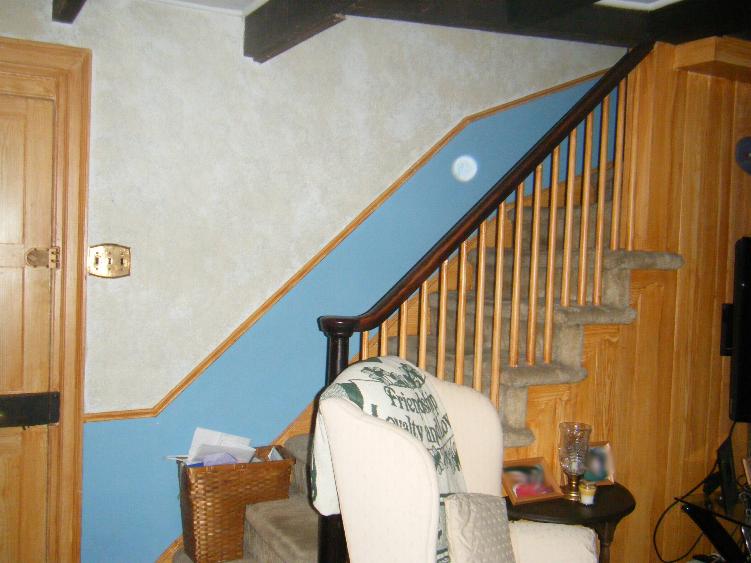 Orb near location of K-2 spikes on stairs. 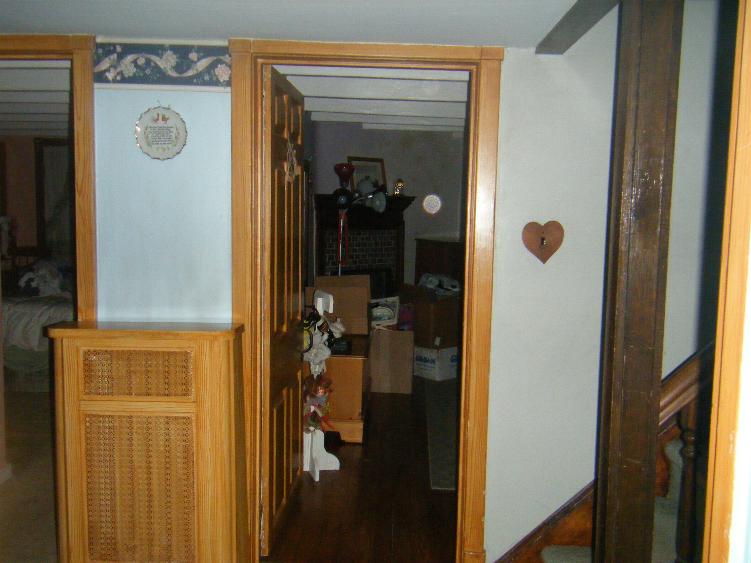 Orb at fireplace where K-2 hit was experienced.

Besides the digital photo and K-2 evidence, the D.A.P.S. teams were able to perform a lot of EVP sessions trying to make contact. On review of the evidence, we found several excellent EVP's.

Note: For the best listening experience, use headphones and raise the WAV volume on your PC.

One of the first EVP's to be captured was with David and Chris who decided to venture down into the basement. David had reached the bottom of the stairs and was waiting for Chris as the stairs were extremely narrow and headroom was minimal. David started making an EVP note that they were in the basement, at that moment a stone was tossed in their direction from the back room hitting the copper pipes to the boiler which was 3 or 4 feet directly in front of David. You can hear the "Ching" just as David ends the word basement, then the sound of the stone landing. He clearly heard it and reacted to it. That experience is caught on this clip.

Our second EVP clip was caught by Jenn and Valerie. They were investigating up on the third floor in the baby's room. Activity in this room was lights flickering and toys being played with. Jenn asks if there is anyone there, and she gets a response, from a baby. It happens immediately after she asks the question and before Valerie says hello. Its sounds like a small infants whimper and can be heard in this clip.

Our third EVP was also caught by Jenn and Valerie. They were conducting an EVP session in the third floor bedroom. Jenn asks if the entity had a name. After a few seconds, she gets her answer. No..... Its a little faint, but with the volume up you can hear a breathy no. It can be heard in this clip.

EVP Answer To Do You Have A Name

Our fourth EVP is the second best one from this investigation. It was also captured by Jenn and Valerie. They had just entered the second floor bedroom and started an EVP session. Jenn states that she would just like to say hello. Jenn gets a direct response from the entity as it responds with Hello.... It can be heard at the very end of the clip, but its is a definite clearly audible response to her, and it can be heard in this clip.

Our fifth EVP was caught by a digital recorder that was on the Second floor recording. Kim and Jenn were investigating down on the first floor near the bottom of the stairs. Kim makes a comment about the EMF Detector, and a few seconds later is invited to "come up". That can be heard in this clip.

EVP Asking Investigators To "Come Up"

Our sixth and last EVP was caught by David and Kris while investigating up on the third floor in the large bedroom up there. They were taunting a little as things were quiet. They both hear a slight ticking sound like finger nails on wood in the corner behind them where they sat on the end of the bed. There is a wood door there that goes to a bathroom. David asks if the entity can make a noise or bang something. Maybe move something. We believe that something did move, and it can be heard in this clip.

D.A.P.S. teams had several personal experiences. Personal experiences are paranormal events that take place that affected the investigators during their investigation, but were not captured by the equipment.  We will list them here as they belong with the evidence we did capture.

One personal experience was with David and Kris while doing an EVP session in the third floor bedroom. While recording, they both heard outside in the hall a single footstep. It was too short and not quite loud enough to be captured on the digital recorders, so the only thing we have is Kris and David reacting to it making it a nice personal experience of note.

Another personal experience was with Kris and Kim, where they experienced a series of high K-2 spikes in the baby's room while they were investigating. Unfortunately they did not have the digital camera with filming capability with them at the time.

Another personal experience was while Kris and David were doing an EVP session in the third floor bedroom. Both heard a faint tapping noise on the door leading to the bathroom behind them and reacted to it. It was captured on EVP, but is very faint. We tried to clean it up some to see if we can bring out the tapping sounds more clearly. The following EVP is the result. The tapping is most clear just before the end where David asks can you hear that.

D.A.P.S. had several hours of mini-DVD footage that was set to record the base of the stairs in an attempt to capture any shadow people or apparitions. On review of the footage, none were detected, and during the night no other evidence of the apparition or shadow person going up or down the stairs was found. We also did not capture any footsteps or loud bangs outside of the personal experience by David and Kris mentioned above.

Several large movie segments captured with the digital camera with that capability were also reviewed and nothing significant was found.

In conclusion, after reviewing all of the evidence captured, and in consideration of the amount of good  evidence that was found at the location, D.A.P.S. believes that there is some sort of mild paranormal activity happening at the residence.